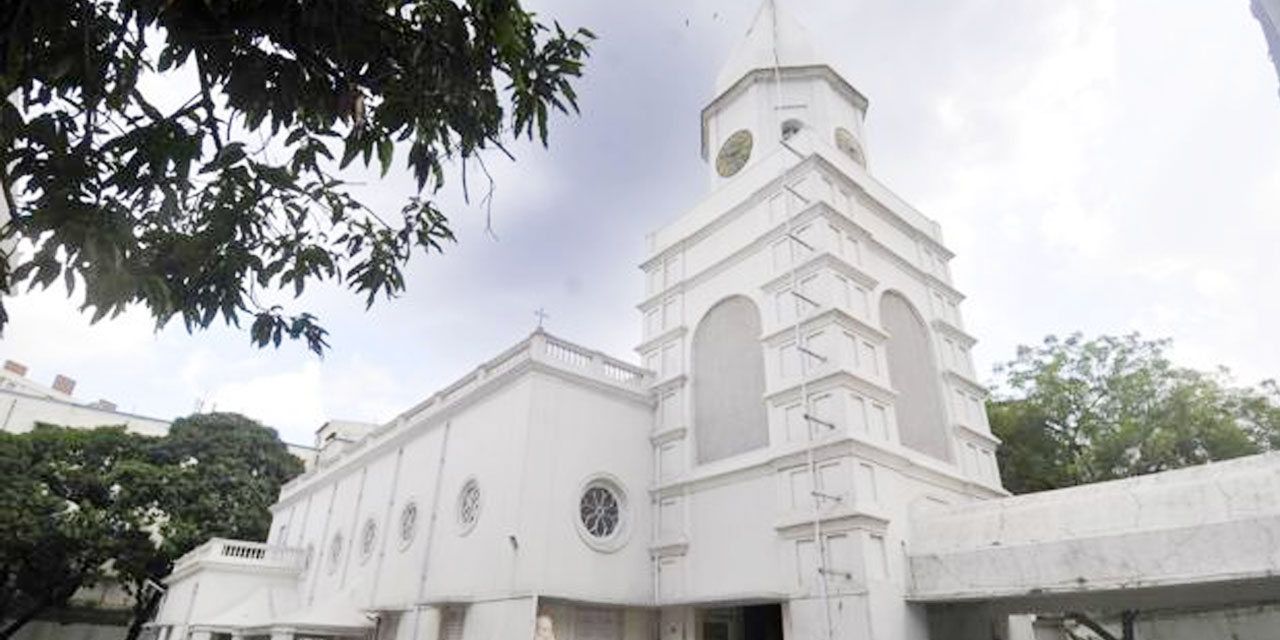 Armenian church was built with funding from the British East India Company when they signed a contract on 22nd June 1688, with all of the Armenian Population of India residing in the country at the time.

The contract with the East India Company was signed by Sir Josiah Child representing the Company and Khoja Sarhad and Khoja Fanush representing the Armenian community of Bengal. According to this contract, the East India Company decided to build churches all across India making sure any area with at least forty Armenian residents had a church and a provision of a salaried job as a priest at those churches.

Later in 1708, which is now considered as the official founding date of the church, though some say it’s 1705 or 1707, the British East India Company made a wooden church on a site that is now considered a section of the southeast wing of the Church of Holy Nazareth.

The interior of the Armenian church was designed by Catchick Arakiel, who also made a monastery for the priests and built the high walls around the cemetery. He also donated a huge clock that was supposed to be fitted to the church structure. Then in 1790, he made a room for the clergy and placed the clock on the belfry. The interiors of the church are very lavishly decorated with a combination of white and black marble that were contributed by wealthy Armenians.

There’s a staircase that leads up to the galleries where the walls have intricately designed frescoes and paintings. The altar has a cross, the Gospel and twelve crosses to symbolize the Twelve Apostles of Jesus Christ. Even the outer buildings were all built at the expense of wealthy Armenians from Kolkata. Towards the east side of the churchyard, there are the remains of a Persian bath on a boundary wall of St. ‘Hamam’ which is a Persian word for a bath.

Armenian Church can be visited from 9 in the morning to 4 in the evening on all days of the week. There is no entry fee to visit the church.

Things you can Do at Armenian Church Kolkata

The Armenian Church is renowned for its historical associations and the beauty of time that reflect along its architecture. There are certain things you need to keep an eye out in order to be able to completely appreciate this historical gem. They include:

Interiors: While you’re paying a visit to the Armenian Church of Kolkata, one of the main attractions would surely be the beautiful interiors. If you’re a history lover and enjoy looking at different cultures, their ways, practices and works of art then the interiors of this church will leave you breathless. It depicts the Persian or Armenian way of following Christianity through the design of the gate or the walls inside the church.

Magen David Synagogue: Once you’re done with looking at the Armenian Church you can also visit the Magen David Synagogue which is also on Armenian Street, and it functions as the only religious centre for the jews in the city. The synagogue is over 150 years old and usually neglected by tourists in Kolkata.

Burrabazar: Burrabazar is also nearby if you’re in the mood for some shopping. This wholesale market is one of the oldest in India as it dates back to colonial times, and has expanded in size ever since.

How to Reach Armenian Church Kolkata

The Holy Church of Nazareth or the Armenian church is located towards the northwest corner of Burrabazar which is a part of Central Kolkata. The church is very near the Howrah Bridge and is easily accessible by all forms of transport. You can also book a private cab from top car rental companies in Kolkata for a hassle free ride during your Kolkata tour.

Bus: Once you get to Kolkata by train or flight take a bus to Burrabazar and walk towards the Armenian Street and you should find the church.

Ferry: If you want to come from Howrah to Armenian Church in a ferry you can hop on a ferry to Armenian Ghat.

Metro: The closest Metro station to get to the Armenian Church is the Mahatma Gandhi Road Station which leads right onto Burrabazar.

Overall, the church is a lovely place to visit during the day and isn’t very crowded. Even though the locality is very bustling, the inside of the church is very calm, peaceful and quiet. As a tourist, you can have a wonderful trip through the history of Armenians in India and do not forget to bask in the glory of all the paintings and frescoes of the church. The Church is readily used by the Armenian Community of India. Any tourist or citizen of India can visit the church mostly at any time of the day for no entry fee.

If the church is being used for any gathering or function such as Christmas, Easters or Martyr’s Day then you are likely to see smartly dressed children who are part of the choir. The cemetery is a lovely place to visit during the day and again doesn’t require any entry fee. It is dotted with potted plants and is also the resting place of RezabeebehSookia whose grave dates back to 1630 which is the oldest Christian grave in Kolkata as it predates the arrival of the English in 1690.

A trip to Kolkata is best enjoyed with Kolkata tour packages offered by Kolkata Tourism, a division of Holidays DNA. You can have a memorable holiday experience with our tour packages that include a visit to all the popular and important tourist attractions of Kolkata. Please fill the Contact Us form for us to help you better.