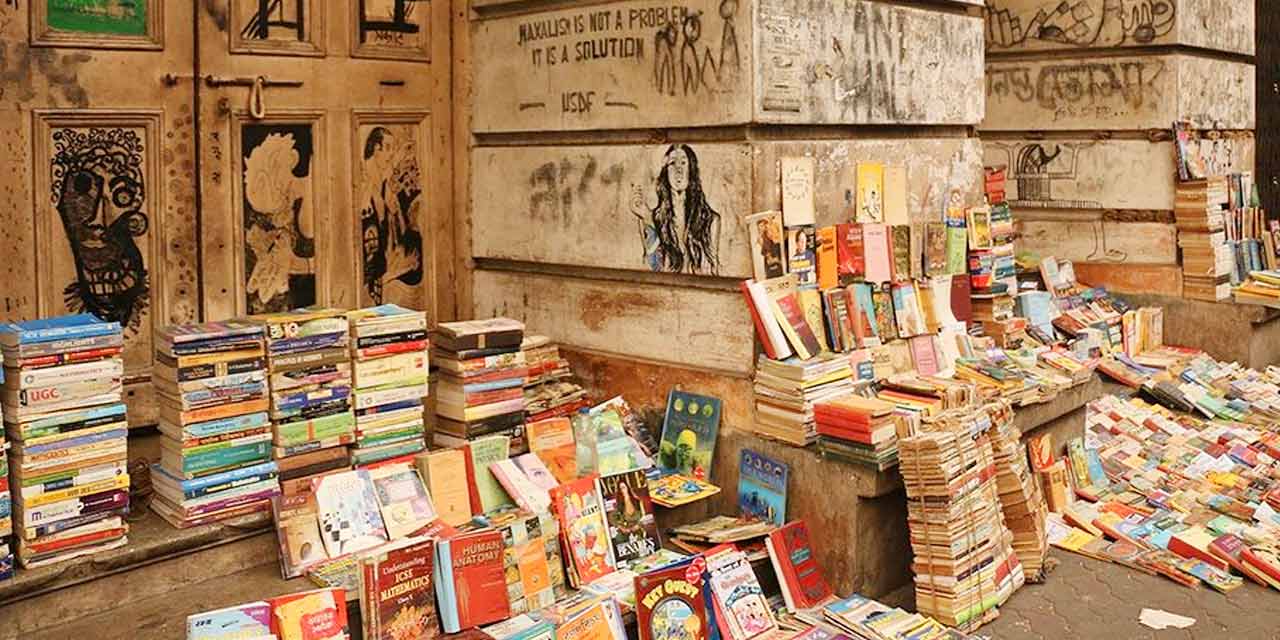 The College Street of Kolkata is popularly nicknamed ‘Boi Para’ (Book Colony) by the locals. Spread across a stretch of 1.5 kilometres, the College street boasts of being the world’s largest repository of second hand books and the largest book market in India, available at dirt cheap prices. One can acquire good books at very cheap rates by hard bargaining too.

The book stores here are mostly makeshift ones, in addition to quite a few good publishing houses and bookstores. If one cares to browse thoroughly, one may also get hold of the first editions of a couple of iconic writers. Apart from being famous for its collection of books, College Street is also known for being visited by the eminent literati of the city.

The place is home to most of the prestigious academic institutes of India, namely, Calcutta Medical College, Presidency College, Hare School, Hindu College, University of Calcutta and Sanskrit College.

The history of College Street goes back to 1817 when David Hare established The Hindu College in pursuit of providing liberal education for the children of the members of the then Hindu Community. The college started with the 20 scholars as first bunch of students.

The approval of the building came in under the governance of Lord Wellesley, who took charge of the planning and construction of roads in the area around College Street. Hence, the street on which The Hindu College stood was named The College Street and has been known by the same name ever since.

Before it was named College Street, the road used to be known as ‘The Great Arterial Road’. The street was named amongst the featured landmarks of India and finally made it to Time Magazine’s ‘Best of Asia’ list in 2007.

The Indian Coffee House and College Street are known to be twin landmarks of Kolkata. The Coffee House at College Street is the most iconic building and is most famous for being haunt of the crème de la crème of the city since its inception. It has always been an adda (meeting place) for the stalwarts of literati, arts, academia, politicians with the likes of Netaji Subhash Chandra Bose, Rabindranath Tagore, the Oscar winner director Satyajit Ray, noted scientist Jagdish Chandra Bose, Amartya Sen, Aparna Sen, Ritwik Ghatak, the talented singer Manna Dey, etc.

The history of Coffee House is associated with the establishment of Albert Hall in 1876. The Coffee Board came into being in 1942 circa. and it was decided that a coffee house be started and run from Albert Hall. The fact that it was one of the busiest places in the city, the coffee joint was an instant hit amongst artists and intellectuals alike.

Post-independence, the coffee shop was officially named ‘Coffee House’. It was almost shut down forever in the year 1958. However, thanks to the intervention from the professors of Presidency College and Calcutta University, who signed a petition to save it on grounds of being a heritage structure, the management reopened it during the same year.

Nowadays, it is most visited by students of educational institutes that surround College street, quite a few literati as well as a lot of tourists.

Presidency College: Established in 1817, the Presidency college is one of the oldest stellar colleges of the country. The college received the status of an ‘independent university’ in the year 2010. The college is quite popular for being the centre stage to all kinds of political and intellectual debates.

University of Calcutta: The Calcutta University was established in 1857 with a total of 14 campuses spanning across Kolkata.

Sanskrit College: Established in 1824, Sanskrit College is one of the oldest colleges that offers degrees in liberal arts, Pali, Sanskrit, ancient and world history, as well as linguistics.

Hindu School and Hare School: Both Hindu and Hare schools were established in 1817 and 1818 respectively. The Hare School is one of the oldest schools of Kolkata, situated right opposite the Presidency College (University). On the other hand, The Hindu School is run by the State government.

How to Reach College Street Kolkata

College Street Kolkata is accessible by all modes of transport from all parts of the city. Visitors can reach here by bus, train, taxi or metro. They can also opt for a private cab from top car rental companies in Kolkata for a hassle free trip to the city.

One can also get onboard a tram. The nearest tram station to College Street is Esplanade Tram Depot.

Kolkata Tourism, a division of Holidays DNA helps you to explore the best of Kolkata with various Kolkata Tour packages that offer a peek into all the popular tourist attractions of this city. To know more about the various packages, please fill the Contact Us form and we will get back to you.