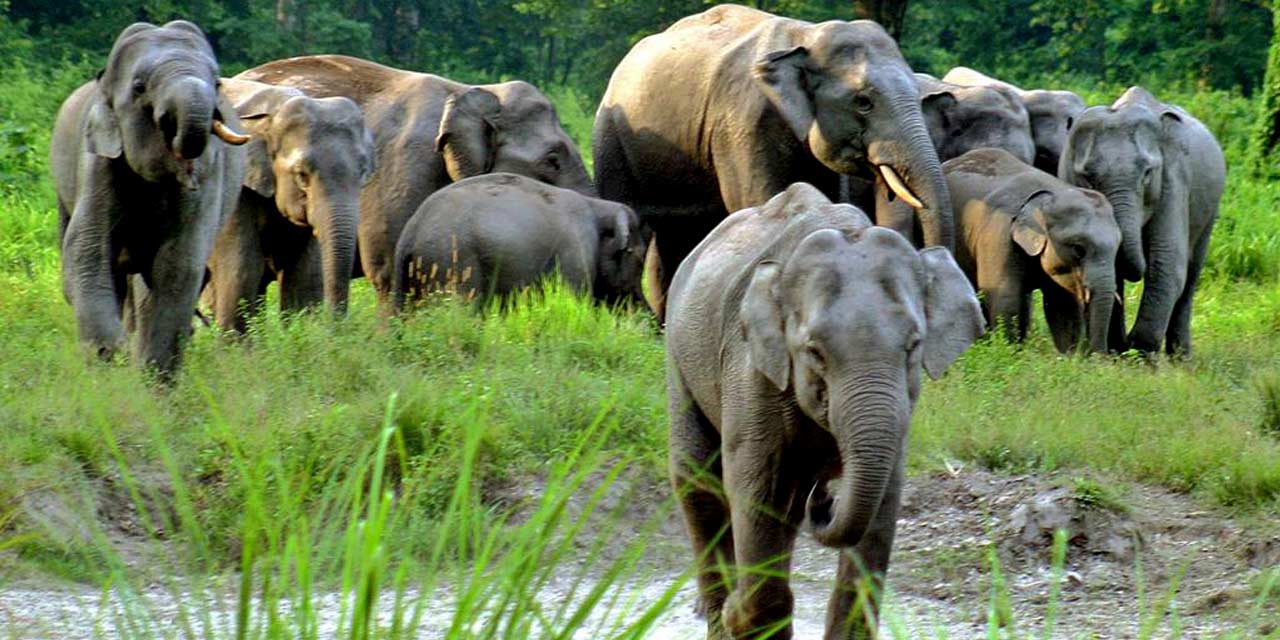 Established in the year 1941 as a wildlife sanctuary, Jaldapara National Park is a beautiful destination located at the foothills of Eastern Himalayas, by the banks of Torsha River. It is situated in the new district of Alipurduar in West Bengal, India. The national park falls in the Dooars region, which is not only famous for its tea gardens but also boasts of having dense jungles that are home to many endangered species of animals like tigers, rhinoceros, elephants, etc.

The park has rich vegetation providing a perfect setting for a myriad of flora and fauna. It is a bird watchers paradise and is best known for its number of Asiatic One- Horned Rhinos. The population of one- horned rhinos is marked to be around 160 and is at a steady increase.

The jeep safaris are arranged during mornings as well as evenings. There has been a rise in the number of watch towers where jeep safaris take place in recent years due to boost in tourist footfall. The only condition of jeep safaris is that tourists must travel in forest department approved jeeps and every jeep has to be accompanied by a guide.

Way before in the 1800s, the area was a tribal settlement of Toto and Mech (Bodo) tribes. The place was known as ‘Totapara’ during the time. Jaldapara Wildlife Sanctuary was established in 1941 in pursuit of protecting the great variety of flora and fauna, particularly the one-horned Indian Rhinoceros that was threatened to be on the edge of extinction.

The wildlife Sanctuary was declared as a National Park in 2014.

Jaldapara National Park is situated at the foothills of the Eastern Himalayas, by the banks of Torsha River in Alipurduar district of the state of West Bengal in India. The park is spread across a total area of 216.51 square kilometres and is located at an altitude of 61 metres.

The park is filled with a mixture of flora including wood mosaics, swamps, grassland, sandy riverbanks and brooks. There is great diversity of flora of mixed deciduous forest, grasslands and river banks. The forest is dense enough which makes it difficult for the sunrise to penetrate through and reach inside. The Torsha River flows through the Rainforest Park mostly covered with extensive belts of tall grasses, thereby making the vegetation rich with variety of wildlife.

Jaldapara lies on the western bank of River Torsha and on its eastern bank lies Chilapata Forests. The Malangi River also flows nearby from east to west. Drained by rivers Torsa, Malangi, Hollong, Chirakhawa, Kalijhora, Sissamara, Bhaluka and Buri Torsa, the Sanctuary provides grassland that forms the last refuge to a wide variety of mammals, amphibians, reptiles and birds.

The major attraction of Jaldapara National Park is its population of one- horned rhino. Out of the very few areas where the one- horned rhino is found, Jaldapara has the largest rhino population only after Kaziranga in Assam. The grass wetland of the national park makes it a favourable natural habitat for survival of the rhinos.

Birds: Jaldapara National Park is a treasure trove of avi fauna due to the varied terrain and rich vegetation as well as exceptionally rich insect population. There are more than 240 species of birds in Jaldapara National Park spread across its landscape habitat of grassland, water bodies, and woodland making the environment ideal setting for survival.

The national park is a mecca for bird watchers. One should not forget to carry a binocular to get the sight of Hornbills taking flight along with Racket-tailed Drongo and Asian Paradise Flycatcher.

Reptiles: Python, monitor lizards, kraits, Cobras, geckos and about 8 species of freshwater turtles have a home in the park.

Flora: The national park becomes colourful with attractive and beautiful flowers soon after monsoons. Some prominent species of trees found here include Sal and Shisham trees. Numerous shrubs, ferns and tall grass are evidently in abundance.

Activities to do at Jaldapara National Park

Jaldapara National Park remains open between September 15 to June 15 and the best time to visit is between October to March. The park remains closed during monsoon months. The weather of the national park remains warm and humid all year around.

How to Reach Jaldapara National Park

By Road- Jaldapara is well connected from national highway with Siliguri and can be reached by car. Also, buses of North Bengal Transport Corporation, Bhutan Government buses as well as mini buses from Siliguri can be used to reach the national park. Board the mini buses that run between Siliguri and New Alipurduar via Madarihat. Madarihat is the entry point to the sanctuary and is located on the NH 31 (Siliguri- Hasimara) highway.

Nearby Destinations from Jaldapara National Park

Totapara is a small tribal village that is home to the aboriginal Toto tribe, the most primitive tribe of Dooar region. The village is located at a distance of 30 kms from Jaldapara on the banks of Torsha, sharing borders with Bhutan. The major attraction of the village is the lifestyle of the locals.

The village is about 22 km from Madarihat, which is the entry point of Jaldapara National Park. It is surrounded by Torsha River to its east, foothills of Bhutan to its north, Titi River and Titi forest reserve to its south which are separated by Hauri River on the south-west.

Chilapata is a place for history buffs. Beside a visit to the Chilpata forests, if one goes further deep inside, there are ruins of thousand year old fort of Nal King that has a great historical and archaeological importance. The 5th century ruins belonging to the Gupta Empire fall on the way to Cooch Behar, through the Chilpata forests.

A trip to Chilapata forests can be combined with half a day tour from Jaldapara.

Khayer Bari is an animal rescue centre where the animals from circuses have been brought after the ban of use of animals in circuses and are rehabilitated and treated. There are a number of Royal Bengal Tigers and Leopards that can be seen here.

The Buxa Tiger Reserve was established in the year 1982 to save the most important species of North Bengal, The Royal Bengal Tiger. The tiger reserve is located at the north-eastern corner of the Dooars plain by the border of Bhutan and Assam. Spread across an area of 315 square kms, the Buxa Duar Fort was declared a national park in the year 1992.

Situated at 85 kms from Madarihat, and 45 kms from Alipurduar, Bhutan Ghat is a picturesque village located near Indo-Bhutan border on the banks of Raidak River. The name of the village is derived from its proximity to Bhutan. It is an offbeat destination, not visited by many people.

Kolkata Tourism, a division of Holidays DNA helps you plan your tour to Kolkata in a hassle free manner. With its customisable Kolkata Tour packages, you can have a relaxed holiday experience without burning a hole in your pocket. For further queries, you can fill the Contact Us form and we will get back to you at the earliest.