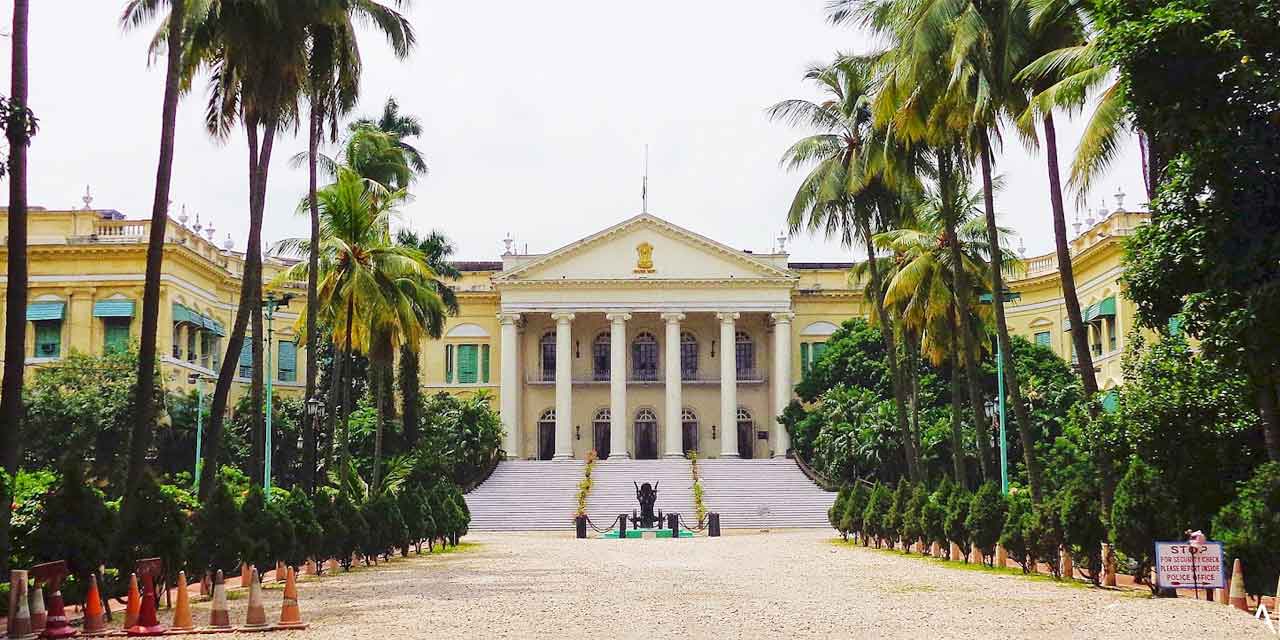 The official residence of the Governor of the state of West Bengal in India is known as the Raj Bhavan. This is a heritage building that had been built way back in 1803 during the empire’s regime. After India’s independence, what was earlier known as the Government House became the Raj Bhavan.

The total area that the Raj Bhavan and its complex covers are over 27 acres while the floor space of the building itself is around 84,000 square feet. The building is known for its imperial architecture and massive gardens which used to mark it different from the thriving urbanization of the city. Now public entry is allowed on the premises where you can take guided tours or check the rooms, suites, corridors and balconies of the Raj Bhavan out for yourself.

In the early nineteenth century, the Governor-General of the East India Company lived in a rented house known as Buckingham House, which was located where the Raj Bhavan stands now. This house stood on land owned by a man named Mohammed Reza Khan who was a Nawab of Chitpur.

Four years later, in 1803 the construction of the Government House was completed. The entire project made a huge dent in East India Companies funds as it took nearly sixty-three thousand pounds to build the structure, this is roughly three million pounds in today’s estimate.

Wellesley was accused of improper management of funds and sent back to England in 1805, while Kolkata ended up with one of its finest colonial mansions. This building was later used by the Viceroy of India, till the capital was shifted to Delhi. Since then this building has been used by the Governor of the state of West Bengal as their residence.

The Raj Bhavan in Kolkata was designed by Captain Charles Wyatt. It is known to have a neoclassical style of architecture with baroque overtones. After Wellesley left in 1805, several changes have been made to the structure of the Raj Bhavan such as the metallic dome was added in the 1860s by Viceroy Lord Elgin.

Lord Curzon brought electricity and a lift to the Raj Bhavan. The original lift was installed in 1892, by the Otis Elevator Company which operates to this day. Raj Bhavan is three storied with a huge central open area consisting of large halls, curved corridors and detached wings on all of the four sides.

There are a total of 60 rooms in Raj Bhavan excluding all halls, balconies, banquet halls, and a magnificent Throne room. On the second floor of the building, there are four residential suites in four corners of the building.

The main suite which is known as the Prince of Wales suite that is usually used by foreign dignitaries during their stay is on the first floor towards the north-west wing. The first floor also consists of the main Throne room, it has a banquet hall and also has the Blue coloured drawing rooms and the Brown coloured dining rooms.

On the ground floor lies the Marble Hall which is open to the public and can be seen during the day. The second floor or the top floor has the residential suite of the Governor and the Ballroom.

Things to do at Raj Bhavan Kolkata

Raj Bhavan is located in the centre of the city, which is why a ton of tourist attractions are right around the corner. To visit the interiors of this fascinating building you will need prior permission from the office of the Governor of West Bengal.

If you do get to visit the place you will enjoy and appreciate everything about this grand attraction. If you don’t get to visit the Raj Bhavan from the inside, standing at the North Gate you get a wonderful view of the gardens, the lines of trees and the grandeur of the structure itself.

There are several buildings around the area if you want to visit a few. Some of them include:

1. Saheed Minar: It is located at the Esplanade crossing.

2. St. John's Church: Right next to the Raj Bhavan lies the St. John’s Church which looks magnificent in yellow and worth a visit.

3. Eden Gardens: On the other side of the street lies the cricket stadium of Kolkata known as the Eden Gardens, which also has its garden known by the same name.

4. Millennium Park: About a ten minute walk away, lies the kids favourite Millenium Park where adults and children alike can enjoy the entertaining rides and the riverside view from the park.

5. Writer's Building: Right next to Raj Bhavan lies quite a few colonial buildings such as the Writer’s Building.

7. Fort William: Fort William is a historical fort that gives you a glimpse into Calcutta in the 19th century.

8. Maidan: The largest open green land within the city known as the Maidan which translates to “field” in English isn’t very far away from the Raj Bhavan either. The size of the Maidan is huge!

Places to Shop and Eat near Raj Bhavan Kolkata

For tourists who have other plans such as shopping and eating, there are two very famous markets very close to Raj Bhavan:

1. New Market: It is one of the oldest markets in the country.

2. Chandni Chowk Electronics Market: Lose your mind at the pocket-friendly prices of the items found here.

Foodies who love to eat must-visit:

1. Dacres Lane: Dacres Lane is about a ten-minute walk from Raj Bhavan and this lane provides a variety of cuisines for breakfast, lunch and dinner to the office goers of the locality. Dacres Lane is famous for being old, authentic and equally tasty with their recipes and traditions.

2. Chung-wah: Chung-wah is famous for its Chinese dishes. It is one of the oldest bars and family restaurants in the city.

3. Sabir's Hotel: You should surely try the dish known as Mutton Rezala at Sabir’s Hotel which is essentially a lamb curry.

How to Reach Raj Bhavan Kolkata

The building is situated in the locality known as Dalhousie, which is known as the old commercial hub of the city as it houses most of the major offices .It is right next to the famous cricket stadium in Kolkata called Eden Gardens. You can easily reach the Raj Bhavan from any part of the city using several types of conveyance such as:

Bus: You can take a bus to Esplanade and walking towards Babughat for five minutes will bring you to the Raj Bhavan.

Cab: You may take a cab straight to the Government House, online rental taxis are also available in the city of Kolkata. Alternatively, you can opt for a cab from top car rental companies in Kolkata and explore all the popular places to visit in Kolkata quite comfortably.

Ferry: You can take a ferry to Babughat and a small five minute walk towards Esplanade will bring you to the Raj Bhavan.

Train: The nearest train station is the BBD Bagh station, with trains running every half an hour and only two minutes away from the Raj Bhavan.

Metro: If you want to take a Metro, get off at Chandni Chowk Station or Esplanade and walk it to the Raj Bhavan, it’s around a three-minute walk.

Overall, the main attraction about the Raj Bhavan is how beautiful and huge the construction of the building is. One of the main things that makes it fascinating for a general tourist is the history behind the building.

The fact that you can stand near or if you’re lucky enough within the grounds of the place which was once a palace for the East India Company’s Governor-General of India and then later used by the Viceroy’s naturally makes it a place of heritage and royalty even now.

There are several guided tour companies in the city that conduct tours to help tourists get permission to enter the premises and get an opportunity to walk around the rooms and courtyards.

If you’re more into the local culture and the people of the city, then there’s no place better than Raj Bhavan since it is the city centre, and all the major tourist spots, museums, cinema halls, food joints, markets, parks and gardens are mostly situated around this area.

It must be a lovely feeling to stare at the Doric pillars of the Raj Bhavan and walk under the floral chandeliers that decorate the place, the heritage and splendour of the Raj Bhavan should be protected as it signifies the glory of our colonial leaders and the present Governor’s pride.

Kolkata Tourism, a division of Holidays DNA makes your trip to the city an enjoyable one with its Kolkata Tour packages designed specifically keeping in mind the preferences and budget of its customers. You can choose the package accordingly and make your Kolkata trip a memorable holiday experience. Please fill the Contact Us form for further details.