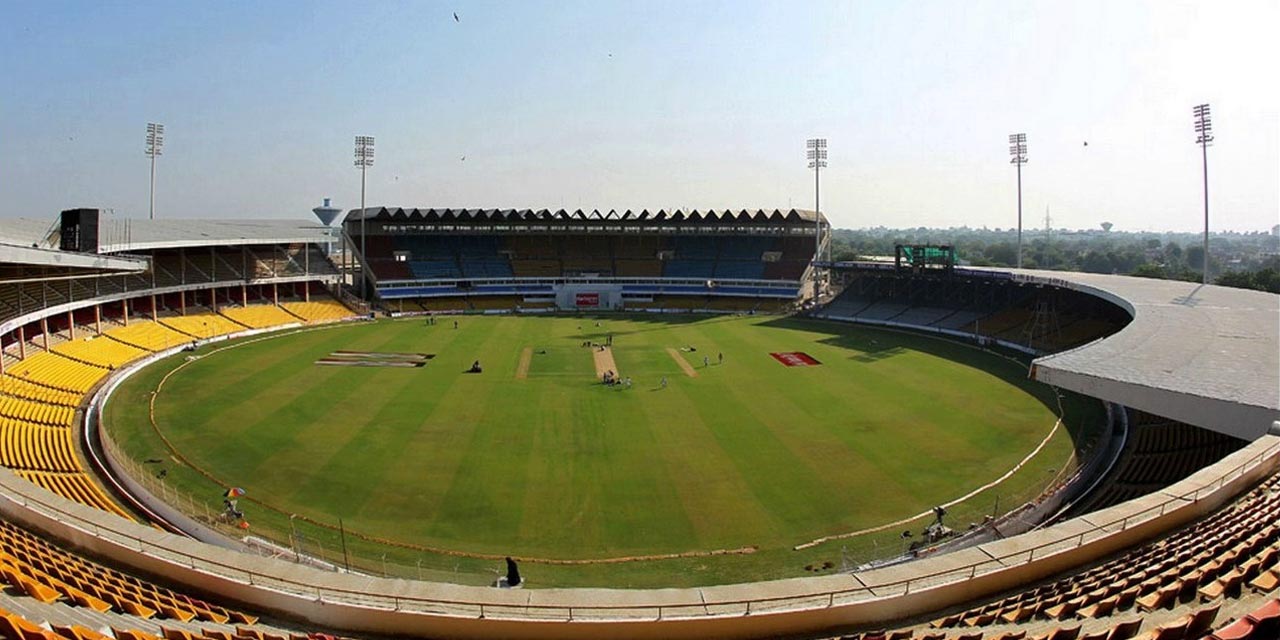 The stadium has a seating capacity of 68,000 and is home for the Bengal Ranji team as well as Kolkata Knight Riders, the IPL team. It has also been used for quite a few Association Football matches occasionally. Eden Gardens has been called “Cricket’s answer to the Colosseum” as well and is undoubtedly one of the most iconic cricket stadiums in the world.

Eden Gardens is also known for its loudest audience. Former Australian skipper, Steve Waugh once mentioned Eden Gardens as “Lord’s of Indian Sub-continent” due to its huge and boisterous crowd. Even Dilip Vengsarkar had called Eden as second best after Lords because of its lively crowd.

During the Border-Gavaskar Trophy match held in 2000-01 when India defeated Australia, the cheer of the crowd was so loud that it has been quoted to be the loudest till date that any match has received. The former Indian captain Sourav Ganguly himself was heard quoting that the cheer after India’s win sounded like a roar.

The stadium has hosted many iconic matches and is a witness to several epic team encounters. Eden Gardens was host to the 2016 World Cup T20 as well as many Asia Cup matches. It was the second stadium after Lord’s in London to host the 1987 Cricket World Cup. From 2017, the stadium has hosted 82 international matches, which makes the highest number of international matches in India.

The Eden Garden stadium is headquarters of the Cricket Association of Bengal whereas, the club house of the stadium is named after former Chief Minister of West Bengal, Dr. B. C. Roy.

The well-maintained stadium is located in Kolkata’s B. B. D. Bagh Area, very near to the State Secretariat and opposite to the Calcutta High Court.

Established in 1864 by Lord Auckland Eden, the then Governor General of India, the stadium was given the same name as that of the oldest parks in Kolkata, Eden Gardens. This park is located adjacent to the stadium, and was designed in 1841. It was named after the Eden sisters of Lord Auckland, Emily and Fanny Eden. Initially, it was called ‘Auckland Circus Gardens’ however, the name was later changed to ‘Eden Gardens’ inspired by the biblical mention of the Garden of Eden.

It is said that the then Viceroy Lord Auckland Eden and his sister Emily Eden had helped curing a fatal disease of the young daughter of Kolkata’s then zamindar, Babu Rajchandra Das. In return for this favor, the zamindar gifted one of his biggest gardens located besides river Hooghly to the Viceroy and his sister. The garden which was called ‘Mar Bagan’ earlier, was renamed to ‘Eden Gardens’ after it was gifted to the Edens. The cricket grounds was built between Babughat and Fort William.

The stadium used to be twice the size of what it is today as it was built on the grounds of the Eden Garden park which is still functional at the back of the stadium. Visitors can still take a stroll in the gardens as it remains open every day.

There is a Burmese Pagoda at the northern end of the garden. The pagoda is surrounded by water and is 150-year-old. The class of buildings that the pagoda belong is called Tazoungs or Thein Tazoungs where, the Buddhist Priests offer their prayers. Legend has it that the Burmese Pagoda in the Eden Garden premises was shipped from Prome to Calcutta on the orders of Lord Dalhousie in 1854. The garden which is just like a mini botanical garden, also houses an Orchid house, a Japanese garden, a butterfly garden and a cactus house.

There are several records that have been made in this stadium including the greatest number of runs in a test match by V. V. S. Laxman (1217 runs), the most number of runs in ODIs by Sachin Tendulkar (496 runs), the highest ever individual in a single ODI by Rohit Sharma in 2014 (264 runs) are some of the best examples. Famous Indian bowler, Harbhajan Singh had taken 3 wickets back to back (hat-trick) in the Test cricket against Australia in 2000/01 and became the first Indian to do so in this stadium.

The stadium had an initial capacity of 40,000 before 1987. There were quite a few renovations that the stadium has gone through, thereby gradually increasing the capacity up to an approximate of 94,000. This was done just before the 1987 World Cup wherein the facilities were upgraded. The press box, the television infrastructure and the clubhouse were renovated.

To get maximum coverage with minimum support, the roofs are supported by 42 columns along with multi-tiered covered stands. The roof was constructed in such a manner that the stadium became an unlikely engineering spectacle. The new Eden Garden matches the standards required for hosting first class international cricket under the ICC rules.

The second renovation in 2011 led to the reduction in seating capacity from 94,000 to the present capacity of 68,000. The renovation had been undertaken to match the ICC standards set for the 2011 Cricket World Cup.

The new renovations included the addition of a new clubhouse and players' facilities, the exterior walls were upgraded to give the stadium a new look, the roof structure was cladded with a new metal skin, patron amenities were upgraded and new additions were made to the signages and lot many other improvements were done towards the existing infrastructure.

In 2016, a bell was added to the stadium with the intention of starting the day’s match by ringing the bell. This was used for all matches including test matches, ODIs as well as T20 matches. The first person to ring the bell was former Indian captain, Kapil Dev. He had done it to start the test match between India and New Zealand in September 2016.

The Historic stands of Eden Gardens

The stands of the Eden Gardens stadium in Kolkata are named after prominent cricketers and soldiers of Indian Army. The names include that of Sourav Ganguly, Pankaj Roy, Jagmohan Dalmiya, and B. N. Dutt.

Some of the names of the Soldiers after whom 4 stands are named include, Colonel Neelakantan Jayachandran Nair, Havildar Hangpan Dada, Major Dhan Singh Thapa and Subedar Joginder Singh Sahnan.

1962- India v/s England: India gained victory in this match. This was the first ever match where India beat England in a test match after a long period of 27 years. India had won the match by 182 runs.

1975- India v/s West Indies: Though India could not win the test series, the third test match in a 5- match series went on to become a legendary victory when India beat West Indies by 85 runs. The match was played against legends such as Sir Andy Roberts, Bernard Julien, Roy Fredericks and Lance Gibbs in the West Indies team. Winning this match proved to be a boost to the team’s confidence.

1993- India v/s South Africa: The iconic win of this Hero Cup final match was pulled off by none other than our own master blaster, Sachin Tendulkar with his miraculous bowling over at the last moment. India won the match by 2 runs.

2001- India v/s Australia: The iconic match is remembered due to the sudden twist pulled off by partnership of Rahul Dravid and V. V. S. Laxman when the first four batsmen took a quick return to the pavilion very early into the match. Rahul and Laxman played till the end and India won a match that was thought to be lost in the beginning.

2005- India v/s Pakistan: After losing to Pakistan at Mohali in the test series, India went on to win the thrilling match at Eden as well as the entire series thereafter.

2013- India v/s West Indies: This match is termed iconic as it marked the last test match played by Sachin Tendulkar of his career. It marked the end of an era.

Entry to the garden is free but entry to the stadium is only permitted during matches and restricted by tickets. Presently, the Eden Gardens Stadium is a popular venue not only for sports, but also for concerts and exhibitions.

The stadium can be visited throughout the year. Since it is hot and humid during the day, a visit during the evenings are most recommended.

Visitors can only enter the stadium when there are matches being played. However, if one wants to visit it during a no match day, they need to get a permit from Cricket Association of Bengal (CAB).

How to Reach Eden Gardens Kolkata

Since it is located at the heart of Kolkata, reaching Eden Gardens is very easy either by taxis or local buses that ply from all major stops in the city.

The nearest metro station to Eden Gardens is the Park Street. From the metro station, one needs to walk to the stadium.

You can also hire a cab from top car rental companies in Kolkata to visit all the popular sightseeing places of Kolkata.

Eden Gardens is one of the historic places of Kolkata that one must definitely visit during their Kolkata Tour. Kolkata Tourism, a division of Holidays DNA helps you to plan your trip to this lively city in the best possible manner through its Kolkata tour packages that are quite affordable. To know more about the various packages, please fill the Contact Us form.